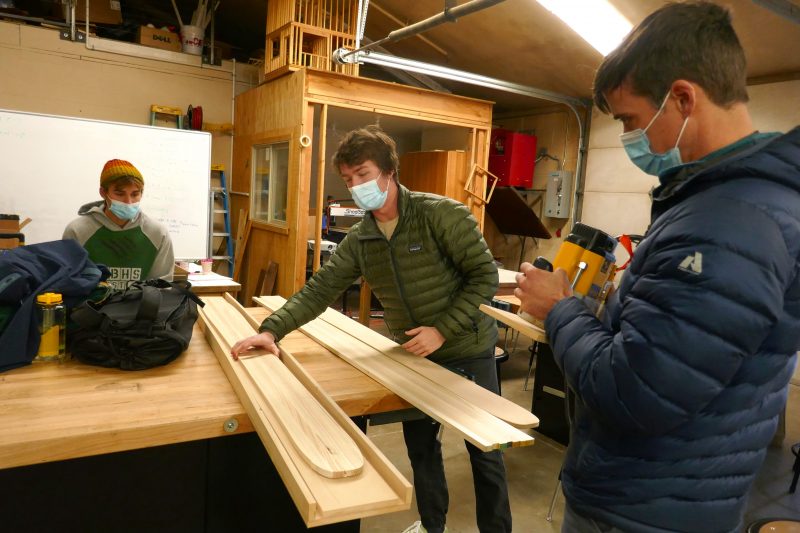 Imagine carving graceful turns in deep powder while hurtling down the slopes – on skis you designed and built yourself.

For four Liberty Bell High School Design and Construction II students, that vision will become a reality when they finish making custom skis — complete with an original logo — later this year.

The project took root in the classroom last year, when students dreamed of creating their own skis. Construction/design and outdoor recreation teacher Wyatt Southworth, who despite being a skier has never built skis before, was excited about the opportunity for everyone to learn together. “It’s a deep dive into the manufacturing and design process,” he said.

After some initial research, the class took a field trip in October to Lithic Skis in Peshastin, which designs and creates custom, handcrafted skis. The owners have been generous in sharing their time and expertise with the students, Southworth said.

The folks at Lithic taught them the different stages of the design/build process – not just for the skis, but also for the tools needed to make them. “We saw some cool tools that they had designed themselves,” said senior Eli Neitlich.

At Lithic, they walked through the ski building process from start to finish and gathered tips and insights to inform their own build process. Back in class, the students designed their own ski press and streamlined sled. They also built a press to glue the layers of the ski together.

They built their own ski jig from high-density particle board, which they cut with a bandsaw and finished with a circular sander to smooth out any imperfections.

Making their own skis involved considerable research into not only the different types of skis, but also where to source them. They were lucky to be able to get what they needed despite supply chain issues, Southworth said.

For the basic sizes, the class started with a commercial ski, but adapted the measurements to their needs. They designed the skis to be extra wide so they float better in powder, said senior Kieren Quigley.

Students also studied the intricacies of ski functionality and performance, including the advantages and disadvantages of sandwich versus cap construction for the sidewalls. They chose the sandwich for its durability and torsional rigidity, which prevents the ski from twisting and bending as you turn.

They are currently creating 10 identical poplar and ash cores, which they clamp onto the jig and cut with a router.

The streamlined sled allows them to slowly shave the wood with a ripper to create a gradual curve from the tips and tails, which are just 2 millimeters thick, to the middle of the ski, which is 11 millimeters.

They also cut the ski bases out of a polyethylene base and created a small recess to accommodate the metal edges. They will grind the bases to refine the skis at the end of the process.

The finished skis will be a sandwich of the nylon top sheet, fiberglass mesh, wood core, more fiberglass, and polyethylene base, all epoxy bonded.

They will be able to add custom designs on the top sheet. The class brainstorms a logo for Steezium Ski Works — a combination of the term “steez,” which describes a cool, effortless style of skiing, and a mispronunciation of the element cesium — that they can carve onto the boards.

As students work together on the five pairs of skis, they will have the opportunity to create their own designs for the top sheet.

Skis are the most ambitious undertaking in the education of design and construction students. Projects from years past include tables and shelves, cajón drums, a garden shed and a root cellar. “It’s the most complicated, by a huge margin,” Quigley said.

This initial work prepares them for future production. They can adapt the press to different types of skis and skiers and can use the model for years, Southworth said.

They expect to complete a beta ski this winter. Ideally, all students will have a set of skis by the end of the year.

“It’s a really good way to learn more skills,” Quigley said. “The most important part is having a ski that you built and designed yourself.”

The project is a great introduction to lightweight manufacturing, with the opportunity for students to start a bespoke ski business after graduation, Southworth said. “You can create a value-added product – not in some mysterious, distant place, but it’s something that could happen locally,” he said.