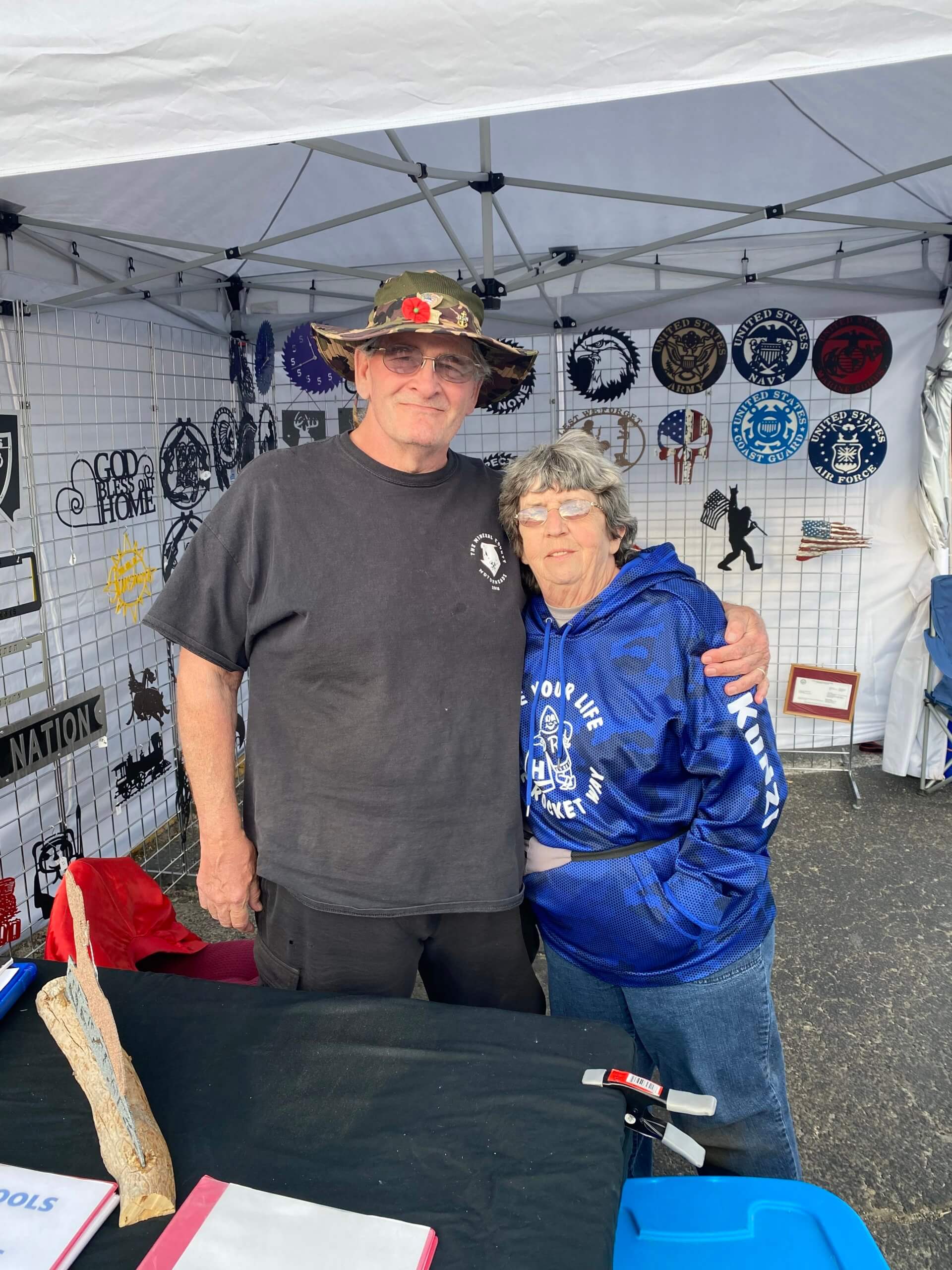 Mike and his late brother Jim got into custom metal sign making when Jim – who loved mechanics and cars – wanted to start a business like this and enlisted the help of Mike who knew more about the computers and design work.

“I was in the navy for 20 years doing electronics and I knew how to hook up a computer and use a CNC cutting system to print designs onto sheet metal,” says Mike.

Although Jim died of cancer three years ago, Mike and his sister-in-law Danell maintain the business.

“She does a lot of detailing and painting,” he adds.

After Mike left the Navy he drove a commercial truck for 15 years before starting Special K Fabrication with Jim. Mike felt that custom sign making was smarter and less strenuous than other jobs or hobbies and something he could do at his own pace while dealing with heart disease.

“Some people retire and move in and work with wood in their workshop; we do, just with metal,” he says.

Since the brothers started Special K Fabrication, Mike has attended events such as Armed Forces Day and hosts one in Fallon to promote his custom metal work. Mike says what he enjoys most about being involved with the company is meeting people and taking on custom projects. Since starting the business, Mike has over 4,000 drawings in his files and hasn’t erased anything.

“That way when I need a deer I can remember when I made one and go back and find it and work on that file,” Mike says.

His most interesting project was a ranch sign for a family in Wellington, Nevada.

“It was three feet tall, eight feet wide, and hung from telephone poles above their metal gate with their cattle brand on it,” Mike explains. “They wanted it to look as old as possible, so I found a non-toxic spray that sets in an hour to give it a rusty look.

“I did house numbers, hummingbirds, butterflies, elk, deer, mountains, trees. Often people don’t know exactly what they want, so I’ll sit down and design it on a computer. And then we can go back and forth to get what they’re looking for,” he adds.

Mike reiterates that he loves dealing with people and making it something they want that they can’t find at Walmart or any other physical store. And while custom work is its specialty, Special K Fabrication makes generic items for sale at special events.

“I try to do something new for every show, things that will sell well. On Armed Forces Day, I’ll do a lot of patriotic things, including American flags and emblems,” Mike says.

He explains that he likes to have fun and meet people and thinks AFD is like a carnival with family and class meetings. Graduating from Mineral County High School in the class of 1974, Mike met a lot of people he hadn’t seen in years.

For the 2022 Armed Forces Day event, he made two items that sold out immediately: a sasquatch holding an American flag and a design of a horse’s head with three horses in the center crossing the base of a Mountain chain. He painted them all black to look like silhouettes, but then he says the person who bought the sasquatch took their sign to the airbrush stand and had it airbrushed red, white and blue, which he thought was quite creative.

Happy as can be to do what he’s good at while keeping his brother’s legacy alive, Mike says his goal with Special K Fabrication is to keep plugging in and enjoying it for as long as they want. all.

“We’re not dependent on income and that keeps us busy,” adds Mike. “[Hawthorne] is casual, relaxing, calm. If I hear a dog barking, it’s probably mine in the yard. I lived in San Diego for 20 years (while serving in the Navy) and couldn’t wait to get out of there; it was too fast for me,” he says of returning in 1997.

And he thinks Jim would be thrilled that the business is still alive and kicking.

“Jim had fun doing it; he did everything he could until his death. He was determined that this business would be for the military. He served in the military and loved American flags, military and Nevada stuff. He was also a die-hard Raiders fan,” laughs Mike.

Assessing the Manufacturing Sector as a Stimulator for Nigeria’s Industrialization

The global sheet metal fabrication services market is expected to grow by USD 3.52 billion during the period 2022-2026, accelerating at a CAGR of 3.47% during the forecast period