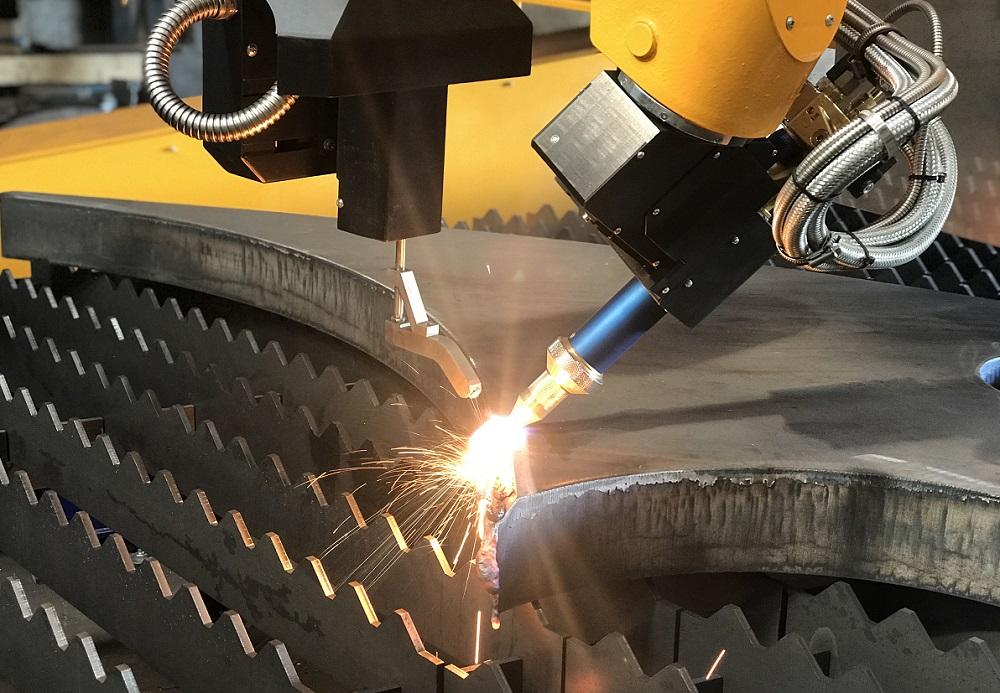 Making one-step beveling a reality in the metal fabrication shop

A bevel is applied over a large part.

As with many things in metal fabrication, beveling thick materials is not an exact science. Sometimes a metal fabrication shop avoids trying to bevel a part made from 1 in. plate, for example, because his table does not have enough power to make the thicker cut that is needed for something like a simple groove bevel or because attempting to make such a bevel results in loss of material to the bottom of the bevel. It’s not worth it, so a secondary process is used.

In some applications, especially where precision is needed, such as in the power generation industry, a robot is used to create the bevel that existing plasma cutting technology could not. Using a robot in these cases adds considerable handling and production time to the beveling process. This, of course, eats away at a store’s profit margins and increases the time between parts order acceptance and goods delivery.

Engineers from MicroStep, a machine tool manufacturer located in Bratislava, Slovakia, recognized this shortcoming. They believed MicroStep’s cutting machines had the wherewithal to deliver precise bevel cuts, but they needed a way to ensure bevel results were as expected.

This led to the development of what the company calls its additional beveling process. Key to the process is a laser scanning device that transmits part parameters to the company’s CAM software.

“When the part is scanned, the control software is able to interpret these scanned images to get an idea of ​​what the part really is, not what it is supposed to be. The control software is then able to adjust accordingly to create precise bevels on the part,” said John Prevish, national sales manager for manufacturing machinery, United Precision Services, the distributor and service provider for MicroStep machines in the United States.

ABP does not require a separate treatment station. A machine operator places the thick piece on the cutting table and engages the laser scanner, which records dimensions for length, width, thickness and shape of all sides and the features cut inside. (The digitizing unit can be attached to the chamfer head or mounted on a separate tool post.) The CAM software, which takes into account the required chamfers programmed for the job, then creates a cutting plane which is aligns with the actual dimensions of the part.

The system can perform bevel cuts in V, Y, X, and K. For K and X cuts, the part must be rotated and scanned again after the initial cut is complete.

“This is really going to be appealing to people who do or want to do thick material cutting. Companies that produce parts for construction or mining equipment, for example, will appreciate these beveling capabilities,” said Forecast.

What is remarkable about ABP is that it is not limited to plasma cutting. For a manufacturing company with a multi-capacity cuttable, the initial straight edge cut can be made with an oxyfuel torch, and high definition plasma can be used for secondary bevel cuts on stand-alone parts. The technology can also be used with water jets and laser cutting heads.

A piece beveled with MicroStep’s additional bevel process is shown.

Prevish added that MicroStep has made a name for itself with its advances in 3D cutting, one of which is the ability of its machines to cut shapes into domed parts, which are probably more easily recognized as pressure vessel heads. One of the reasons ABP can achieve such precise bevels is because it relies on MicroStep’s ACTG (Automatic Tool Geometry Calibration) technology. This system, which includes a calibration station, torch extension probe and control software, ensures that the torch tip always remains in the required position when rotating and tilting the torch head. chopped off. The ACTG is designed to eliminate the need for mechanical bevel head adjustment, which can add significant setup time.

Adding ABP to a standard cutting table of course increases the cost of the system, but company officials said such an investment is less than buying and maintaining secondary processes to produce the same chamfers. In fact, Prevish said the bevel cuts made on the gantry-type machine are much more accurate than what secondary processes can offer due to the stiffness of the table.