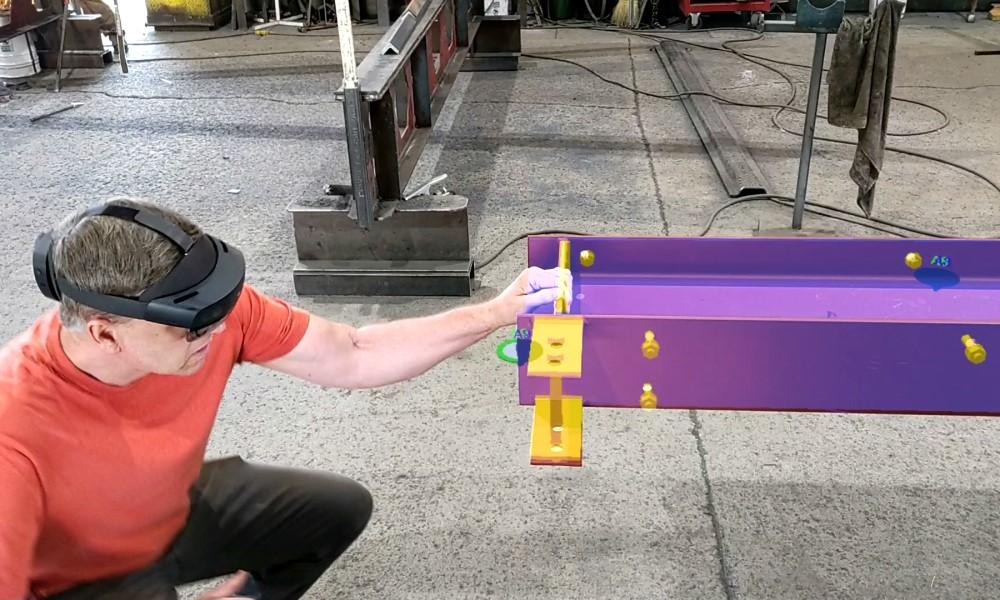 Using augmented reality glasses, a fabricator looks at a digital replica of what the part he’s about to work on should look like when finished. Eterio Realities’ software places a 3D model on the digital version of the structural steel element, giving the wearer of the glasses an idea of ​​which parts should go where on the part. Images: Eterio Facts

The days of staring at a blueprint and then repeatedly staring at a steel beam, trying to figure out how all the detailed parts on the print are supposed to be located on the structural steel workpiece, may be coming to an end. . Augmented reality is here to help.

Certainly, some structural steel fabricators become very adept at looking at a blueprint, quickly guessing what needs to go where, and then tackling the project. This is not the case for everyone, however, especially for newcomers to the structural steel fabrication industry. The ability to translate 2D drawings into a 3D vision of what the part is meant to become is a skill that develops with practice. Some people get to 3D vision faster than others, but it still takes a while before the talent kicks in.

Even then, some projects emerge that challenge the most skilled makers. This is what Warnaar Steel Tech Ltd. discovered in 2010 when she tackled a façade fabrication project for the Sparkling Hill Resort in Vernon, BC. The Swarovski family, a name that might be familiar to those who have purchased crystal jewelry or decorations before, developed the resort, and with this prominent brand being part of the development effort, the building itself- even had to attract attention. That’s why 3.5 million Swarovski crystals are incorporated as architectural and artistic elements, some mimicking the movement of waterfalls and others visually replicating chimneys as daylight dances through them. Then there’s the entrance to the station, which is designed to appear as a giant crystal itself.

Look at any crystal and you see the many angles present. Imagine a giant structure of steel pipes and glass aimed at creating the clean lines and unique shape of a crystal, and you can imagine the many challenges that awaited those tasked with bringing these designs to life.

Looking for a better way

It was clear to Warnaar Steel’s management staff that they needed a better tool than 2D drawings to help the fabrication team.

“It was very complicated,” said Randolph Warnaar, then general manager of the structural steel fabrication business in Kelowna, British Columbia. “As part of this larger project, we had this giant crystal facade and we had to build the supporting steel structure for it. There were a bunch of guy wire clips that needed to be attached to all these pipes 2D drawings just weren’t up to snuff Manufacturers had to be able to figure out how to make it.

“So this was the first time we brought a laptop to the fabrication shop and really asked them to look at the 3D model in order to understand how it all came together. It made me think “We have all these 3D assets, so why are we building these 3D structures from 2D drawings?”

A few years later, in 2015, the first generation of Microsoft HoloLens augmented reality glasses was made available to software developers. Warnaar said that’s when he came up with the “idea for the light bulb”. They could take the 3D building information models, which were widely available but primarily used by engineers and architects, and mix them with the augmented reality technology that was emerging at the time.

Today, Eterio Realities, led by CEO Warnaar, markets the culmination of this early product development and subsequent refinement, achieved in the workshop of the family-owned structural steel company, under the name from FabStation-STEEL, an augmented reality (AR) tool that brings a structural steel part work from a blueprint to a 3D model that replicates what the final product should look like. It is also designed to provide real-time reporting and data exchange to front office management systems.

“I guess you can say our mission statement is to replace all 2D drawings with 3D buildable digital guides,” Warnaar said.

Augmented reality software can also be used with a tablet computer. The manufacturer only has to hold the tablet close to the part to get the full effect of the digital replica on the screen.

So how does it work? A shop fabricator picks up a tablet loaded with proprietary software and passes it over the beam structure. Augmented reality technology acts as a digital model that virtually places the 3D model on the part. By looking at the tablet screen hovering above the part, the fabricator can see which parts should go where and how the build is supposed to go.

“Using the AR feature allows the maker to take ownership of their work and catch errors before they leave the station,” said Chris Thibodeau of Eterio Realities.

With HoloLens 2, the manufacturer obviously has nothing to hold on to. Using the software, the glasses place the elements of the 3D model on the part. The user can adjust the view by simply adjusting the viewpoint. Thibodeau said using HoloLens requires a bit more training, as the interface is generally new to anyone using it, but with consistent use, the maker can get things done simply and quickly, even if those who viewers may find it strange that the person wearing the augmented reality glasses is hitting buttons in the air.

Warnaar said his company is currently targeting the use of Hololens primarily for inspection. The software is accurate to within 1/8 in. or 3 mm when properly calibrated, which is often enough for quality checks since most errors in structural steel fabrication environments are errors gross rather than precision errors. Instead of seeing if a part is placed within fractions of an inch from where it is supposed to be, quality technicians mostly look to verify that material sizes are correct and that parts are oriented and placed correctly. .

The FabStation software also provides access to the job’s complete manufacturing data, including all part and assembly drawings. Reporting and production tracking are also part of the software, giving the front office real-time updates that inspections have taken place and the part is ready for the next process or delivery.

Warnaar described downloading the project data as an “easy download”. 3D models are placed in a zipped file and uploaded to the FabStation cloud. When the download is complete, the user only needs to click on the newly created file to access the digital overlay or other work-related 2D drawings.

“Structural steel is the ultimate prefabrication environment. It’s sort of a controlled environment, and it’s a great testing ground for this kind of technology,” Warnaar said. , we can move on to other things, such as rebar prefabrication, shipbuilding and even on-site activities.”

After more than 18 months of demonstrating the technology at Warnaar Steel Tech, the Eterio Realities team believe their product can make the shop floor more efficient and put new employees on the fast track to becoming more productive.

The steel construction work, particularly the main entrance which mimics the features of a large crystal, at Sparkling Hill Resort in Vernon, BC, motivated Warnaar Steel Tech Ltd. to find a better way to show its makers how to build complex works. Instead of relying on blueprints, company management began looking for ways to take the 3D models that were already part of the building information model and present them in a 3D format. The end result was FabStation augmented reality software.